Skip to main content
Articles in this section
See more

Desktop picker is a tool that allows you to specify the elements of desktop or application interface that the bot needs to interact with.

There are three ways to open the Desktop picker:

Working with the tool is quite easy. When you click the "Pick New Element" button, Studio Pro minimizes and starts a selection mode where you can pick the desired interface element. When you hover the cursor over an element, it will be surrounded by a red frame. Pressing the CTRL+X key combination marks the selected item. The ESC button restarts the element selection mode.

After the item is selected, the Desktop picker window opens.

To the right of the item name its status is displayed, showing whether the item is found, not found or multiple items found.

The advanced options represent the structure (selector) of the picked element, which usually consists of tabs, and each tab consists of attributes and their values. This displays a hierarchy of how the interface element was created by the application developers. You can change, select or exclude attributes to achieve greater accuracy and stability in your interaction with the element.

Take a look at an example of a selector on the Notepad application. 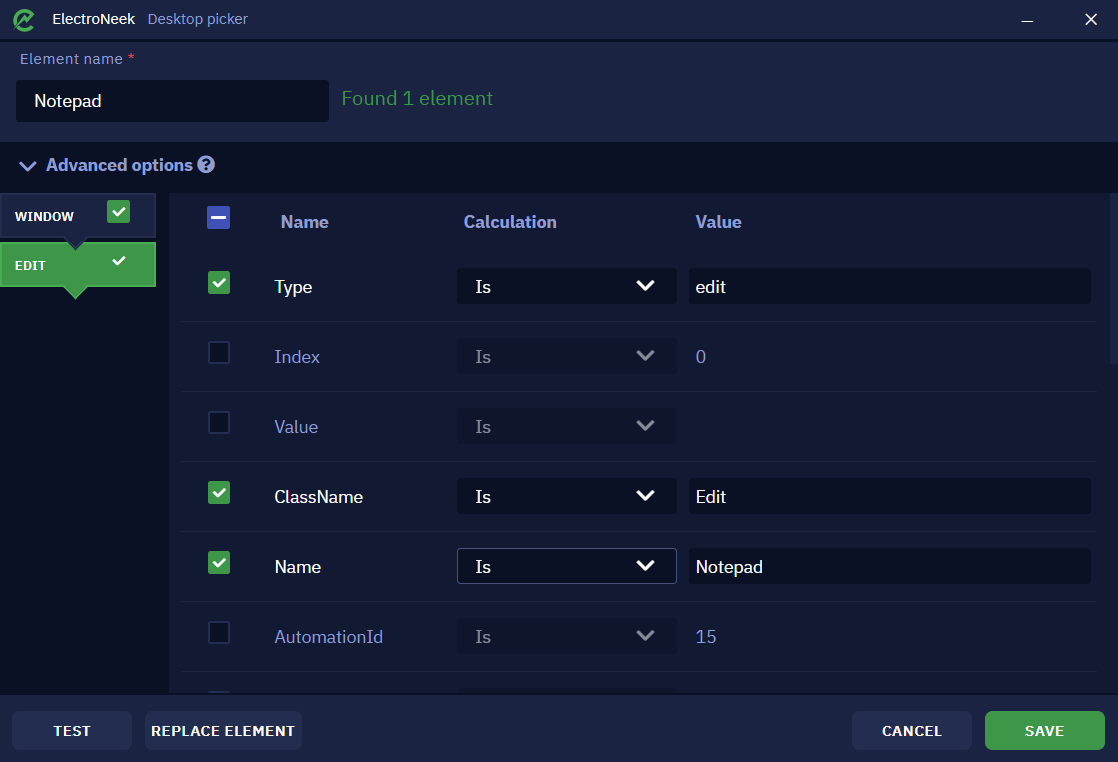 Each tab contains columns "Name", "Calculation", and "Value". Let's discuss the meaning of these columns using one of the attributes of the selected notepad element as an example (see above). Let it be the "Name" attribute:

Depending on the scenario of working with the selector, the values of some attributes can change dynamically. For example, if you start typing text in Notepad, the title of the window will change - a symbol "*" will appear before the title (which is true - look at the title of the Notepad window itself to see this). The same change will happen to the attribute in the Desktop Picker. 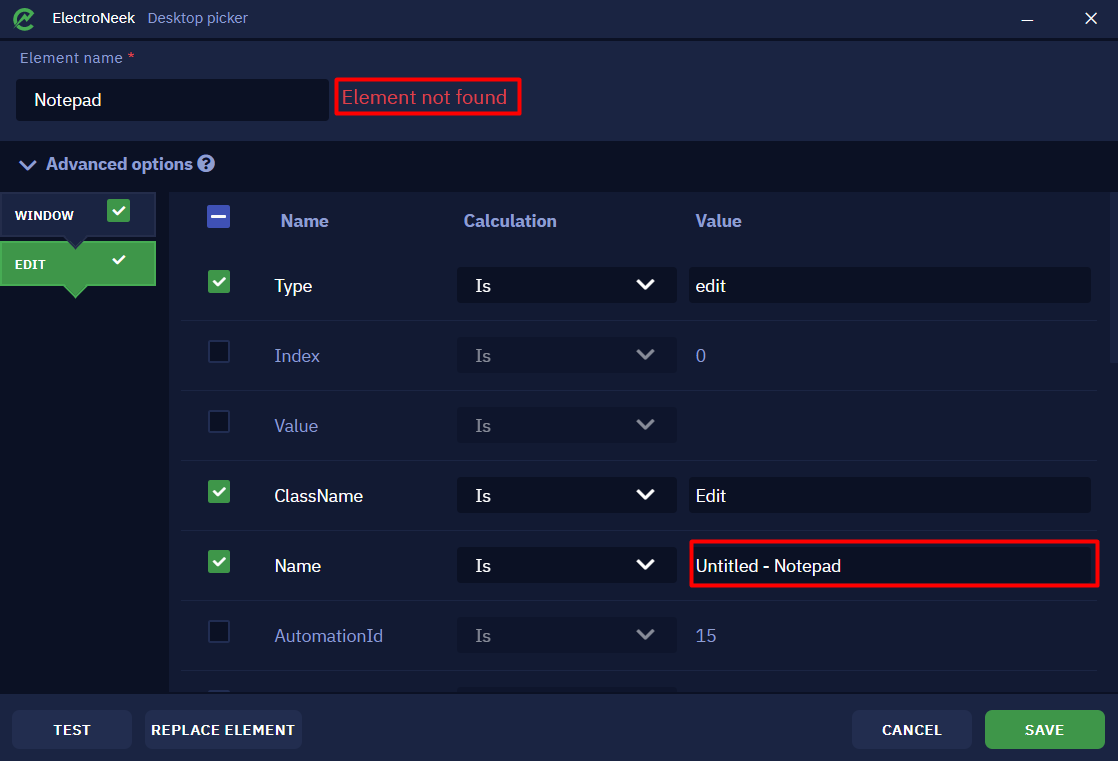 This means that the previous version of the selector (without the "*" in the Name attribute) is not adapted to the case when some text was initially written to notepad, which would lead to a bot error.

To avoid such errors, there are ways to adapt for dynamic attribute changes. These ways are embedded in the " Calculate " column in the table with the selector. Let's take a closer look at them: 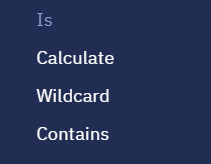 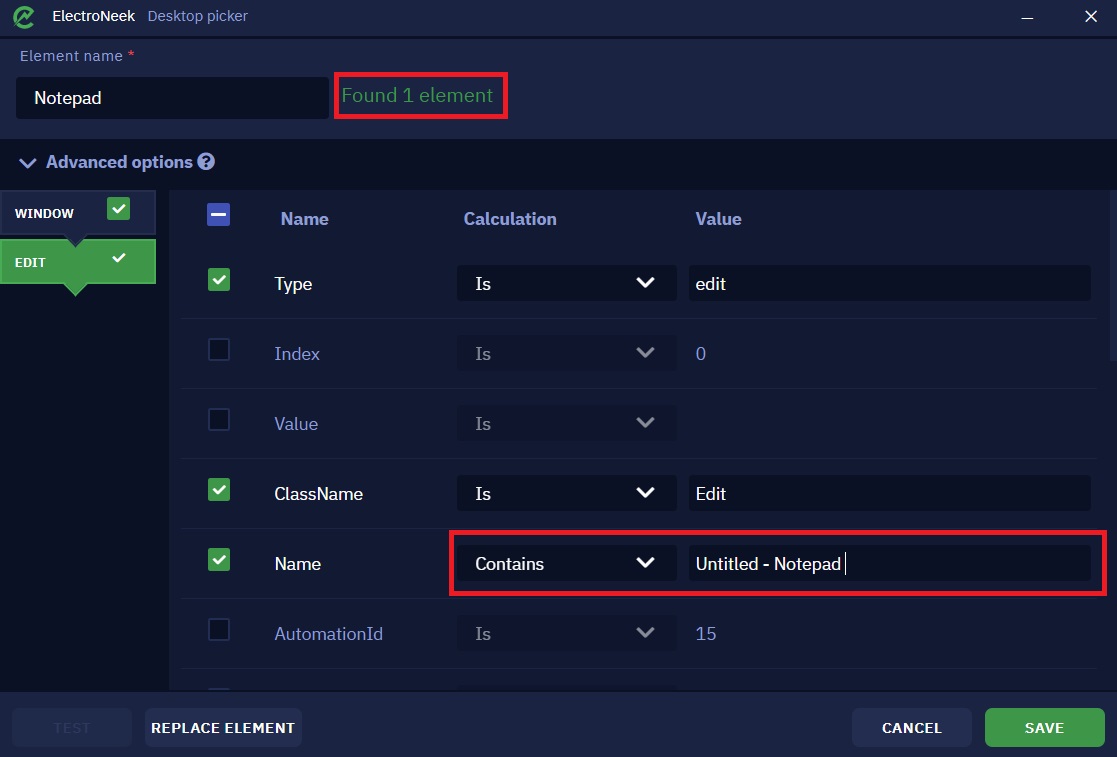 The "Test" button in the selector window allows you to test if an item is correctly detected with the selected selector.

To understand how the replace element function works, let's analyze the basic scenario of its application. Suppose you select an element, run the bot - everything works as it should. After making some changes in the application, the bot, for some reason, stops working correctly (or doesn't start at all). Next, you are likely to try selecting the item again, repeating the same actions and launching the bot. But this may not work either. This situation can occur due to dynamic changes in the parameters of the application which the bot interacts with.

Let's take an example of such situation when working with the standard "Notepad".

If you have just opened "Notepad" and have not yet entered any text, the name of the text file at the top of the window will be as Untitled - Notepad. 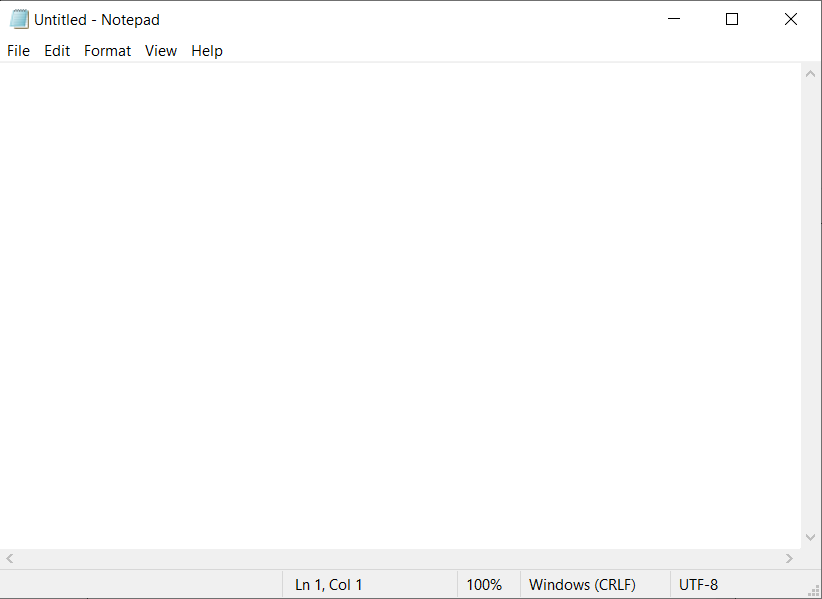 If you start typing any text in the input box, the name at the top will change. Now it will look like *Untitled - Notepad. 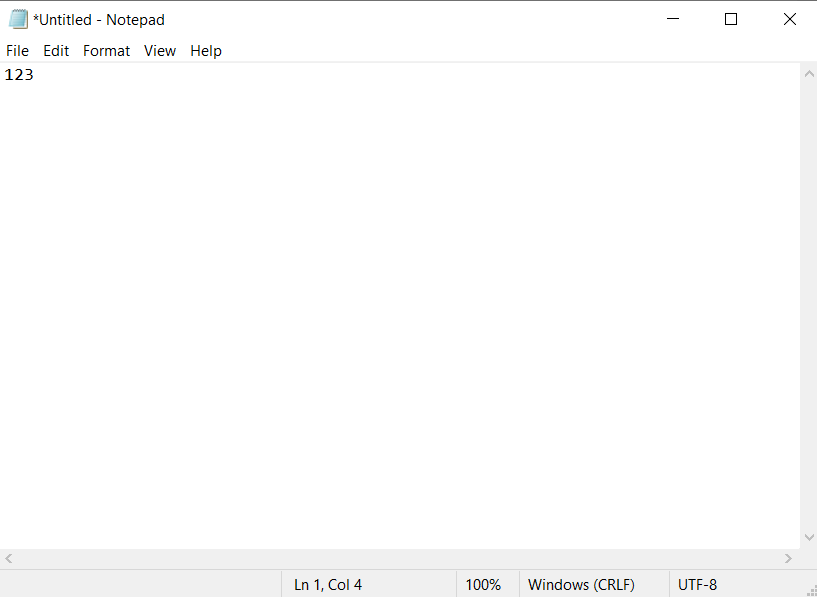 Let's explore another case: you open an already created text file with some content and the name you set when you saved it. 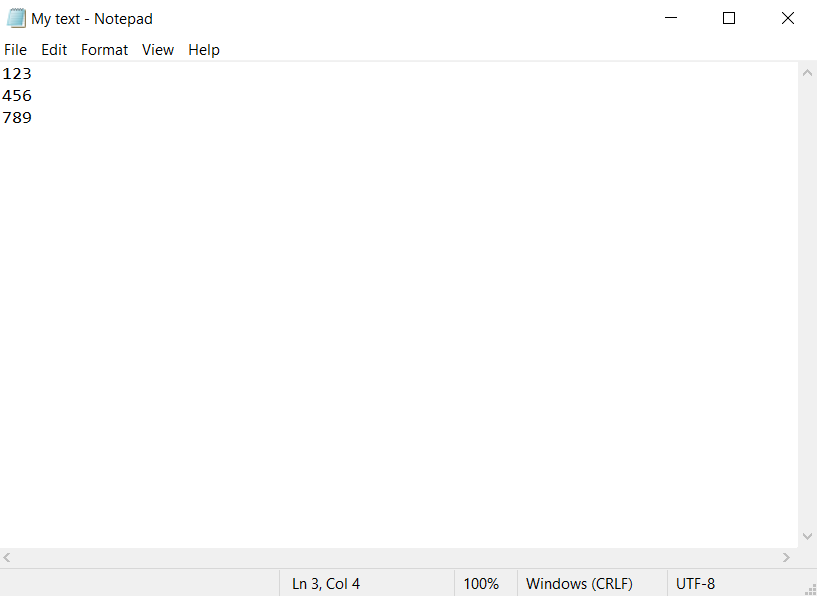 It becomes clear that at different stages of working with the "Notepad", its name and contents will change. These are the dynamic parameter changes we mentioned above. Let us have a closer look at them.

Let's take the Click on element activity as an example. Let's select any "Notepad" element via the Desktop Picker. For example, you can select the input field or the "File" button. The item will be detected without any problems and the bot will be able to interact with it, you will see the message "Found 1 item". Save the current current item with the "SAVE" button. Run the bot, make sure it works. 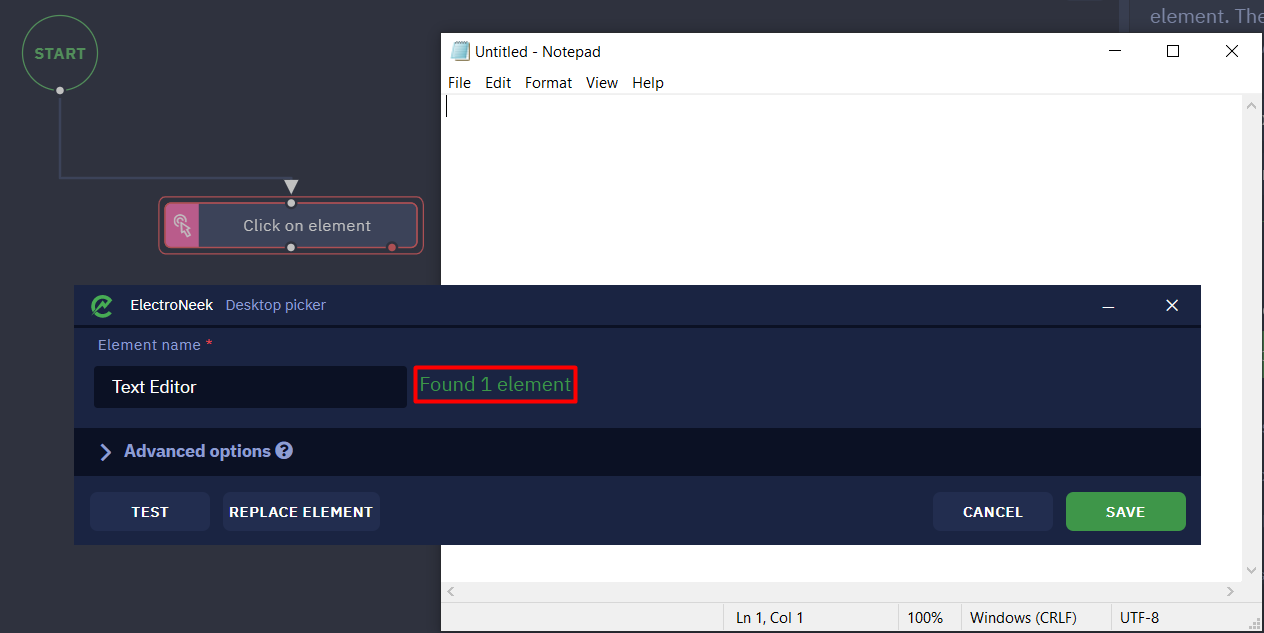 However, you may encounter a scenario where the bot needs to work with different text files. Let's go back to "Notepad" and enter the number 123 in the input field, then the title of the "Notepad" window will change - until the file is saved, the "*" symbol will appear before the title. Thus, the entire header will have the look of *Untitled - Notepad. Let's try to run the bot: it won't work and we will see an error message in the console.

Let's consider another scenario. In the current "Notepad" window, open an existing text file. Note the "Notepad" title - it will look like {{Document name}} - Notepad, which means that the title can be anything. In the screenshots below, the document name will look like a Text file.

Let's try running the bot again. In this case the bot will not work either and we will see an error.

Let's analyze what goes wrong and how to fix it.

Let's expand the "Advanced щptions" to take a closer look at the parameters of the selected item. Let's go to the "Window" tab, which has a Name attribute showing the title of the "Notepad" window. Since the attribute value is set so that the title must be strictly equal to the Untitled - Notepad value, Desktop Picker cannot detect the file with the changed title.

Thus, because of changes in certain parameters (and they can also change during bot execution), the element is not found and the bot cannot work correctly.

Now let's see how we can easily solve this situation. Let's click the "REPLACE ELEMENT" button in the Desktop Picker window, select the item of the last opened "Notepad" again and press CTRL+X. This will open a window like this:

The top of this menu shows the three available versions of the workflow:

Select the " Improved" version of the selector and expand the "Advanced options". Here we will see that the changed parameters are highlighted in orange. Now the item will be detected in any case, since the parameters Wildcard→*- Notepad will be selected for the Name attribute, i.e. the platform will search for elements that have in the Name attribute the phrase - Notepad and any number of any characters up to this phrase. 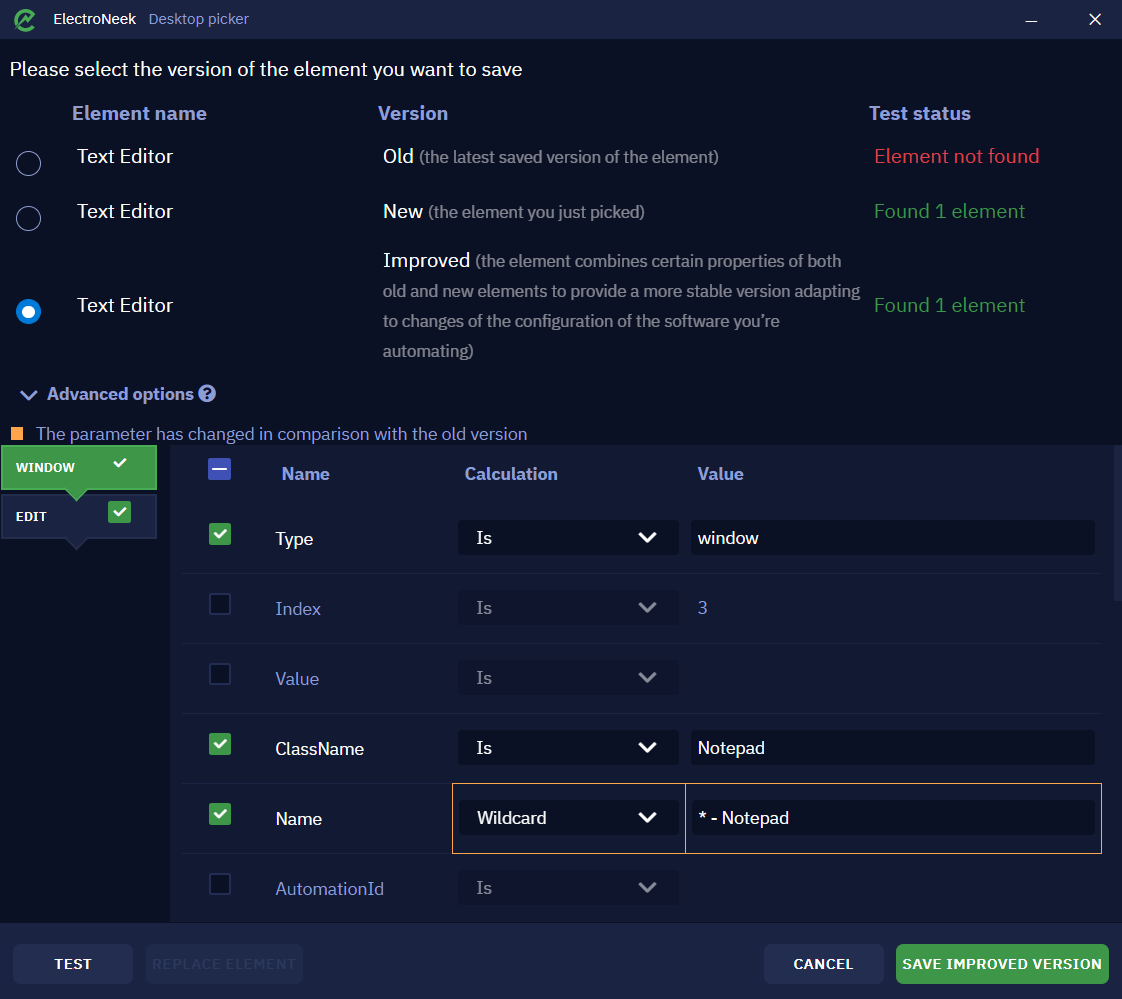 Next, all you have to do is save the element selection in this form. You can also manually adjust the "Name", "Calculation" and "Value" so that the elements you want are defined. We told you more about that earlier in this article.